The other day Makerbot announced the Replicator 2, obsoleting my wonderful replicator model. My initial buyers remorse at no longer owning the most current model quickly faded as I realized that it had a better case but was not much different otherwise. They do advertise getting a .1mm slice resolution with it though and others have posted getting that with the original replicator. I'd never tried going that fine but I think I have a better understanding of some of the internal settings now that I have sorted it out.

I've been rather frustrated with it lately, my prints have had too many gaps and globs and been quite messy. It turns out this was a function of the "acceleration" in the 5.5 firmware update. Acceleration doesn't mean actually going faster, it means that over the course of a fraction of a second the steppers were accelerated up to or down to the new speed rather than slamming from 0 to full speed and back again in a single step. The problem is that the extruder steppers are controlled this way too. Here's an example printed of the "MakerBolt" thing that comes with the new slicing software as an example. I sliced it in replicatorG rather than the new "makerware" as I couldn't get that to work properly yet. The settings for slicing were the non-accelerated speed with 0 shells and 100% infill. The one on the left was printed with the onboard preferences of acceleration turned on and set to their shipping defaults. 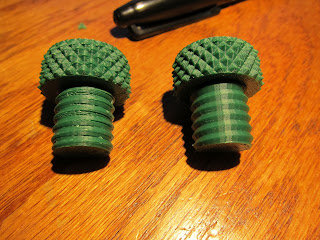 The problem is that you cannot print fast without the acceleration turned on, the steppers can't change speed that quickly and will skip steps and ruin the prints. I have read elsewhere that changing all the acceleration settings to 1000 mm/s/s in the left hand column fixed others problems, it did not fix this for me. It was better but still had dropouts. The defaults have 3000 mm/s/s as the acceleration for the "a" and "b" channels which I believe are the 2 extruders, this was much higher than the default acceleration for the movement steppers. It makes sense for the extruders to stop later and start faster than the movement ones to get the plastic flowing, but these numbers caused gaps at startup and blobs at stop (or possibly vice verse it's hard to tell) the numbers I finally settled on were this: 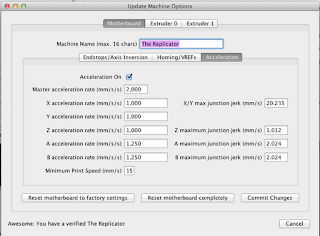 1000 mm/s/s for the axis steppers and 1250 mm/s/s for the extruder motors. This resulted in a print that was 95% as good when printed at the default slow speed as the completely unaccelerated model, and probably 85% as good when printed at full "accelerated" speed. The accuracy of the print at high speed isn't as good, but there were no dropouts or globs of plastic left behind. The bolt doesn't move as freely at high speed as low, so for technical pieces I'll be printing with the slicer speed turned down, but for less critically sized pieces I can now print accelerated with acceleration on and get very nice prints, even at .1mm resolution. Have a look again at that right hand bolt in the picture above, it's a thing of beauty!

(watch out for semantic confusion between the onboard Acceleration which just controls how quickly the steppers come up to the new speed and the slicing accelerated defaults which control how quickly they move overall as they print the model. It's quite possible to have one turned on but not the other)

Posted by James Sentman at 12:19 AM No comments:

Email ThisBlogThis!Share to TwitterShare to FacebookShare to Pinterest
Labels: makerbot

Ben has been throughly enjoying his "Kid Galaxy Dyna Flyer Air Streak" airplane. It runs an amazingly long time on just a few moments of cranking up the launcher thing. 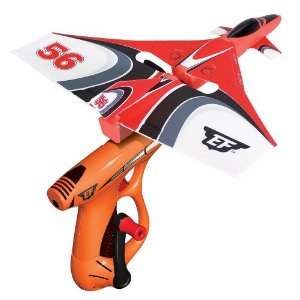 Unfortunately being made of foam it's lifetime was limited and we finally busted the little wires that run through the middle of the prop. Rather than just toss it we had to take it apart to scavange for reusable parts. I knew it had to be a super capacitor in there and indeed it was. 2.7 volt 7 farad. The motor we salavaged for some future project, but the charger and capacitor we kept together and added a multi-chip warm white power LED that I got off ebay a long time ago. I was using these for outdoor lighting long time ago but they didn't really last in that application, or I was overpowering them, so I had a bunch in the toolbox. There is a tiny board in there that shuts off the motor till it leaves the launcher, but we didn't use that, just soldered directly to the capacitor. The voltage is close enough that I didn't bother with a resistor or anything. 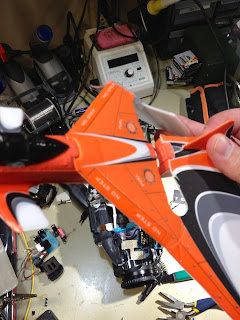 The charger is really quite powerful, about 7 seconds of cranking will run the LED at decent flashlight level for about a minute and a half with many more minutes at diminishing candle and then "find me" levels. 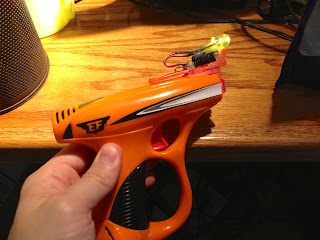 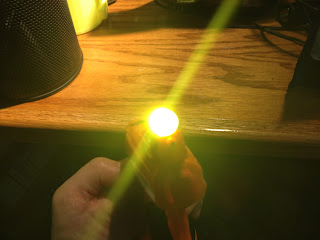 And of course you can shoot it across the room too as it's still on the sled that used to launch the airplane. 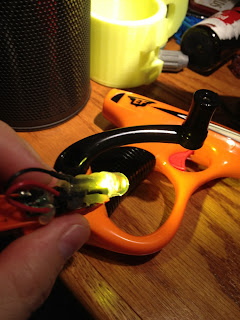 I haven't played with any of this new generation of super capacitors before, but they are certainly going to be useful! You couldn't use a battery in this kind of thing, it wouldn't work at all. I see now that there are a bunch of different versions of this toy, they aren't expensive and it was definitely fun. I'm not sure how we managed not to lose it into a pond or up on a roof or tree while we had it, and when it does inevitably crash and burn like all toy airplanes must, you can salvage the really cool super cap out of the inside!
Posted by James Sentman at 2:04 PM No comments: