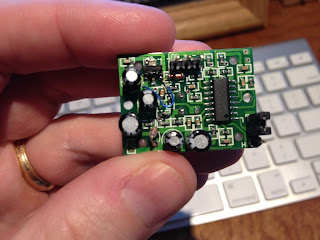 But all this does mean that without the motion sensor the combination of an ATTiny and an xBee radio work great. So other sensors should be a piece of cake, something like a door/window contact closure device that might also sample temperature and light levels on a regular basis should be quite possible. I might concentrate on that for the moment and stew over the motion sensor problems a little longer.
Posted by James Sentman at 10:24 AM 3 comments:

One way of saving money and energy that is touted greatly is a tankless water heater. As I understand it there is still some controversy over just how much money this will save you, and they tend to be rather expensive so the payback can be long. A year ago or so I strapped a temp sensor to the inlet and outlet pipes of my traditional tank water heater so I could measure it's usage and see just how much it's running when nobody is using water to give myself some idea of the use of a tankless water heater here.  Specifically they are dallas 1-wire sensors connected to a Barix, Barionet 50 and finally reading their data in to XTension.

Here is a few recent days worth of data. Yes, I know I have the temperature turned up too high, but this is the kitchen, laundry and master bedroom heater and not the one in the kids rooms. My kids are big enough now that it's not that much of a danger to them. The second water heater that serves their rooms  is still turned down to 120 though so don't worry about us.

The blue line is the cold inlet temp and the red line is the hot output line. The first thing I see is that the cold inlet temp rapidly reaches the same temp as the outlet as soon as you stop using water. That makes me suspect there isn't a heat trap or whatever that fixture is that is supposed to reduce heat loss through the pipe on that line. I'll have to investigate that. But the other thing you see is that in these 3 days there isn't a single point where the cold water inlet temp spikes without a corresponding spike in the outlet temp. Meaning that the water heater hasn't run once not in response to demand in the last 3 days. As it turns out I have to go back to July 24th to find a graph that shows a "maintenance" cycle just to keep the tank warm.

There, at 2:30 in the morning the cold temp spikes with no hot water use measured. I have to go back several weeks again from this to find another one. If I switched to a tankless heater those would go away, and any energy wasted by them. But how much would that be? 2 or 3 waste cycles a month isn't very much to pay back the high cost of a tankless water heater.

The other factor to consider is efficiency or how well does it put the energy that it uses into the water. It was my understanding years ago that electric tank water heaters are nearly 100% efficient, meaning that almost none of the energy is lost, it all goes into the water. Gas water heaters like mine do lose quite a bit of energy up the smokestack, but so do gas tankless. This is an area for further research, but I do not believe that it's a huge difference at this point. At least not enough to make me replace a currently functional hot water heater. When it's time to replace it though I will look seriously again at these figures and it may make sense in the future.

There is an additional consideration as well in cost. Gas tankless water heaters require a lot of gas, they have a minimum pipe size in order to get enough gas. At the placement in my attic where it would replace the existing water heater I would have to have new gas piping run to support a tankless of enough capacity for my home. At considerable expense. The same holds true for electric, you have to have a high amp service run to where it is, they can't just be plugged in to a handy outlet. They use a huge amount of power. If you're on a peak metering system that changes you more if you use large amounts of power your electric tankless is very likely to put you close to or over the limit so the power you use for it may be much more expensive. Do the math on this or you may be very unpleasantly surprised.

Just thinking out loud here, everyones situation is different and it may make perfect sense for you to get yourself one of these. If you use a LOT of hot water you'll never run out, and if you use very little hot water you dont waste energy keeping the tank warm. Though if the tank is like mine the number of those phantom cycles might be very few.
Posted by James Sentman at 7:59 AM 8 comments: