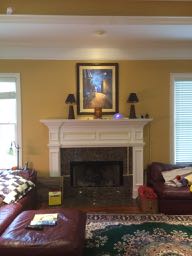 We recently “finished” some small additions to the house. A 2 month estimated project that took 7 months to complete. Then it was my turn to start working on the parts of the project that I wanted to do. That has also stretched out a bit in time, but at least now my long suffering wife knows she couldn’t get it done any faster by hiring an actual contractor ;)

We both hated the family room fireplace (and don’t even get me started on the living room fireplace, that is another blog entry and is now completely gone) it had a real flue at least, unlike the living room “fireplace” but was such a small firebox that once you put 2 logs into it the fire didn’t even start until it was up above the top of the hood. It was built into one of these great mantle/surround things. They look nice from a distance but up close they are just a bunch of particle board moldings screwed together, really clunky and not very nice or useful at all. 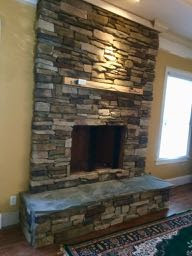 As part of the addition we had a hearth built and what turned out to be a very nice faux stone chimney made. I’m really happy with the way the stone turned out but I wanted a nicer mantle than what they would give me. Offers of a nice piece of reclaimed lumber or something doesn’t really fit with what I wanted so I asked then to just give me a 2x4 cleat across the stone onto which I could attach a mantle I could build myself.

The wiring from the outlets along that wall also ran through that space so I was able to bring it up through the mantle and mount another outlet on to what will be inside the mantle for plugging in lamps and clocks or anything else without having a cord falling over the side which was important to me as that always looked horrible on the existing mantle. 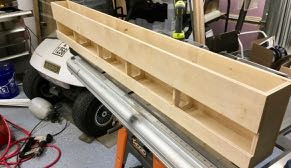 The box is pretty simple. Half inch plywood with an inside system of supports to make sure it stays square and strong. I drilled them out in the middle though so that any wires I ran to anything could get back and forth. The cut out on the top will be removable panels with some holes drilled for cords to come through up where you need them.

Then I went to test fit the box only to discover that the 2x4s they put up were not really alined with each other and weren’t actually straight either. Several hours of messing around with an oscillating saw and a lot of sawdust later and I had straightened up the cleat good enough for the box to fit snugly over and let it get right back against the stone. In retrospect I should have disconnected the wires and just taken off their cleats and added fresh ones of my own but somehow that didn’t occur to me at the time. The rule is doing it wrong takes a lot more time and effort than doing it right ;) 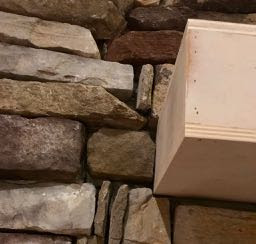 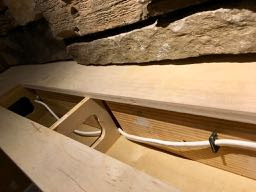 After trimming and shimming the cleats it fit very nice and tight and I only had to take a cold chisel to a couple of stone corners to make it fit fully into the stone face. I ran into another problem which you can see in the first picture above. The electrical wire was getting crimped by the support blocks and keeping them from being flush with the cleat. I could have removed the wire and pulled it through the supports, but I wanted to be able to take off the mantle in the future if the veneer failed or if something happened that I needed to change or fix it. So back to the oscillating saw and I cut some notches into the cleat to allow the wire to safely snake around the support blocks. This removes some of the structure of the thing since they won’t be pressed against the cleat, but it turned out that didn’t matter, it’s plenty strong even before I screwed it into the cleat from top and bottom. Now that the box was complete and fitted it was time to decide about the veneer.

I’ve been wanting to invest in the tools to do real veneering for a long time. Since this was a Significant Other approved project I was able to justify the purchase of a lower end vacuum pump and veneer press. Unfortunately the mantle box is a little longer than 4’ and I only bought the 4’ veneer compression bag. Instead of just buying a larger bag and waiting for it to arrive I decided to go with regular wood working glue and lots and lots of clamps and cauls.

I ordered some beautiful Redwood Burl veneer from VeneerSupplies.com along with the bag and vacuum pump. When it arrived I realized I had another problem. It would have to be flattened in order to properly adhere to the workpiece. For this at least I was able to use the vacuum bag and veneer press. The internet has many products you can spray on the veneer to soften it for flattening and many recipes for DIY flattening and much discussion claiming its pressure or temperature or chemical that you use that is better. It was actually hard to choose a mode of working on this that I knew would work given how many ideas are out there and how adamant the various players are. I ended up using a formula of mostly water with a small amount of glycerine in it. The glycerine to soften the wood, but not so much that it would affect the staining or finishing or glue up process. I gave the pieces a gentle spray, packed them between sheets of masonite and loaded them into the vacuum press overnight. 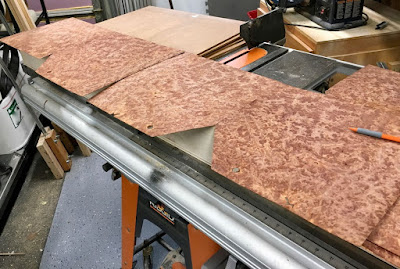 What came out was beautiful and flat and ready for book matching and layup. I gave it a quick wipe down with some isopropyl alcohol to remove the surface glycerine as my tests with small pieces showed that really did mess up the absorption of the oil finish if I didn’t do so. This was also a very oily veneer which would affect the adhesion of the finish without doing this. Acetone would probably have worked better.

I’ve never done anything with veneer before at all so this was an adventure. Instead of cutting the pieces to make them line up perfectly I used fine sandpaper on a wooden block. Taking 2 pieces of veneer that matched and folding them over so the two edges that would match up were together. Then clamping that between 2 pieces of wood without about half an MM or more if necessary to get the angle right, sticking out. Then gently used that sanding block to sand them down flat with the wood they were clamped between. When they were taken out they would open out and fit together perfectly. Again without all the proper tools I didn’t bother with veneer tape, just blue masking tape to hold them together as I prepared them to be glued to the box. 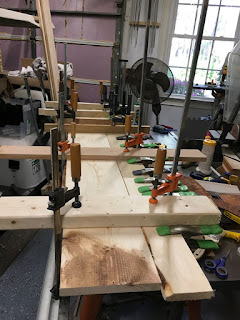 Lots and lots of clamps and cauls later I was really happy with the result. Don’t look too closely at the corners and edges that got dinged. This was a very fragile veneer. I hid most of those spots during finishing either with a little spot of veneer roughly matched or some appropriately colored stain. 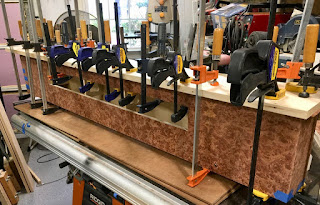 The final veneer before finishing really looked nice and made me very happy! 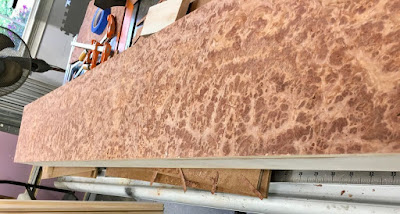 First a coat of Linseed oil to really bring out the color and figure. It darkened up a little more than I would have liked, maybe danish oil next time which I think has less of a darkening effect from what I’ve seen. Perhaps I didn’t experiment with different finishes on this enough before jumping in, but it still turned out fantastic. 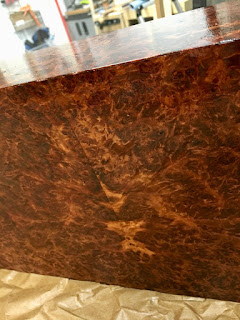 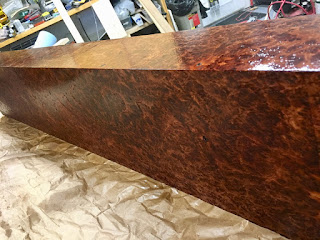 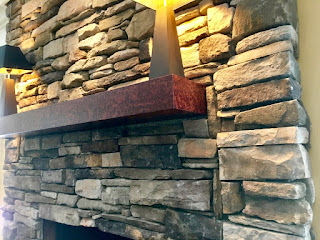 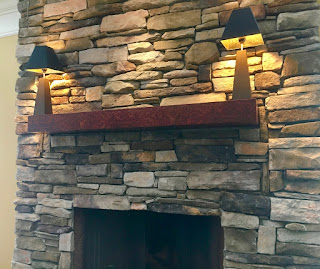 Posted by James Sentman at 9:59 AM No comments: