A little over a year ago a friend of mine saw This Instructable for the “Architectonic Photo Cube” and I offered to build it for her if she ordered the pictures printed to glass. That was not long after we had moved and what with life in general the pictures sat here for a year before I got around to putting them together. I decided to use brass fittings rather than the standard zinc plated and build a nice oak/brass base for the lamp. Since she had waited so long I spent some extra effort on the switch putting in a little knife switch to control the lamp and since it had a second position that would have been boring as just “still off” I put a Candle Flicker LED on the second position so that the lamp can be operated in either lamp mode, or candle mode. 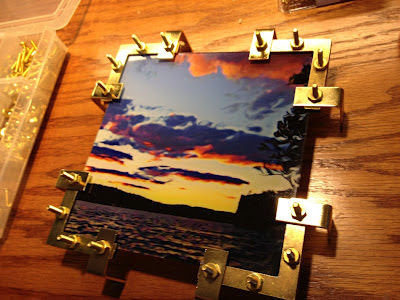 Assembling the photo plates I did pretty much according to the instructable. They look really nice in brass. The corner braces that I got in brass were larger 2” than the ones called for in the instructable so my angle brackers are closer together in the middle a bit, but it wasn’t a problem and looks just as good. 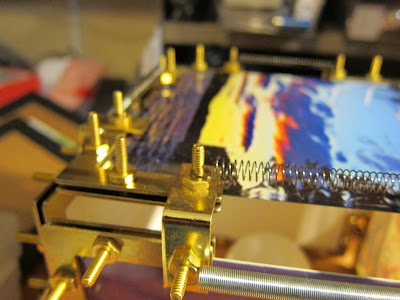 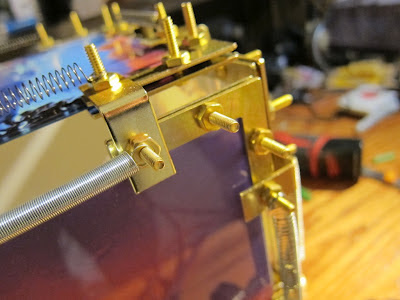 The springs are completely decorative and serve no purpose other than decoration. I was thinking I’d have to wind some copper coils to make them look good against the brass, but I just bought a couple of packs of assorted springs at HD and they were enough to fit. I might have gotten shorter screws than these too as the whole thing is rather more spiky than it technically needs to be but it’s still a stylistic approach.

The base is cut from a piece of 3/4 oak with oak molding around the bottom piece and the top piece has a small routed ogee at the top. The bottom has a cutout under the top part to fit the electronics. 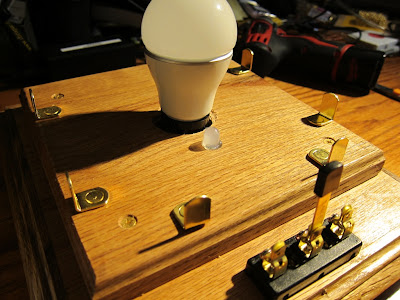 This is a 7 watt Phillips LEd bulb, but we ultimately went with a 3 watt one to just illuminate the photos without trying to actually cast light, it was a better look. The 10mm candle flicker LED is also visible in this picture as well as the brass shelf brackets that I used to hold the top in place. Since the angle brackets I used were 2” ones the tab from those brackets fits perfectly between the nuts on the bottom 2 screws and do an excellent job of holding it to the base but still allowing you to easily lift it off to turn around to show the other pictures. The corners I used these brass corner brackets that are also just available at HD, they are supposed to go on the top of a box, but I thought they looked cool on the bottom of this where they sort of overhang the curve of the molding. Underneath them is just a regular stick on plastic non-slip foot thing to raise it up enough for the cord to get out. 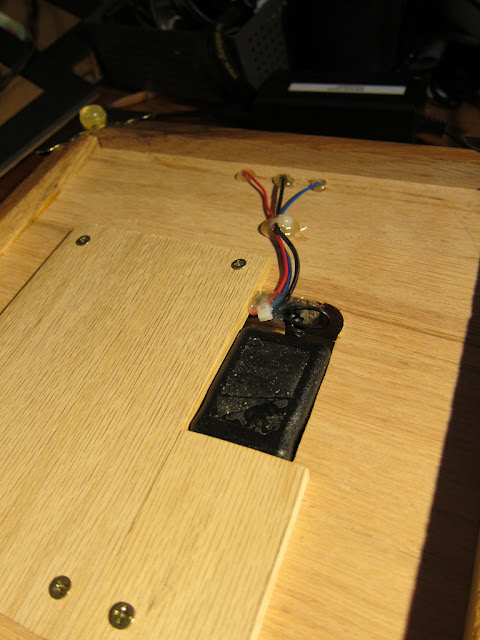 The control system required some extra parts to make the knife switch safe, obviously you can’t put the 120v for the light through the knife switch. That black box there is a little 6v power supply that I just soldered to the power plug directly. That is that runs to the knife switch and powers the candle flicker LED. When the switch is in the other position it turns on a Solid State Relay that isolates the knife switch from the mains power needed for the LED bulb. I considered building a custom LED array to light it all from low voltage, but this offers more options for lighting and was actually much simpler.  The 6v power supply there is just slightly too tall to fit glued in there with a cover over the entire assembly so I made a cutout for it. I could have dremeled or notched the bottom of the plate to cover it completely but I had made enough sawdust at this point and needed to finish the product ;) There are no exposed high voltage wires inside there even if little fingers should turn the lamp over and poke around. 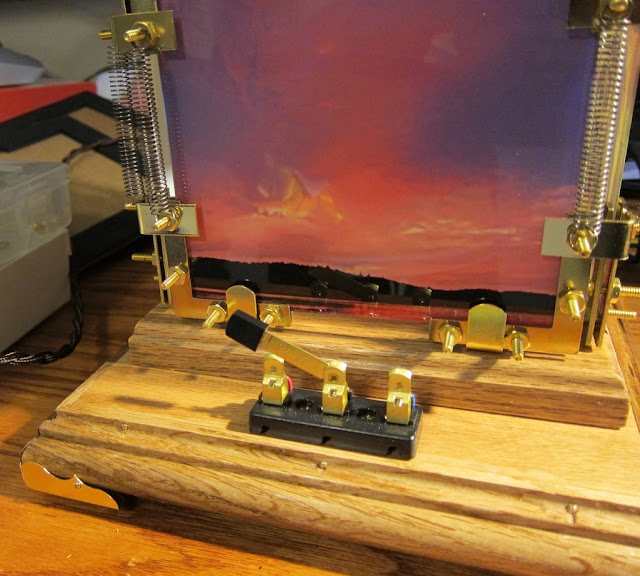 See how well the brass shelf supports fit between the angle bracket screws. Measuring for where to drill the holes was tricky as the offset of the shelf supports was 3/8” and my table saw has come out of alignment a bit so that piece wasn’t quite square and the routed profile meant getting a measurement to the actual edge was a pain. But it’s close enough to centered that it looks fine unless you attack it with a ruler. 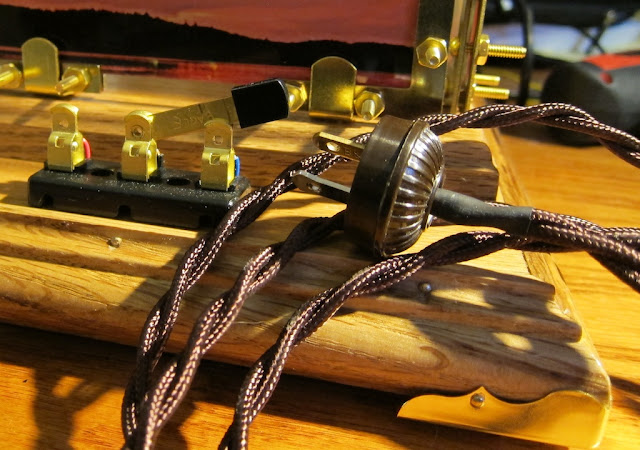 The cord completes the steampunk/vintage feel of the thing. Ordered a spool of absolutely beautiful fabric woven wire from Sundial Wire. 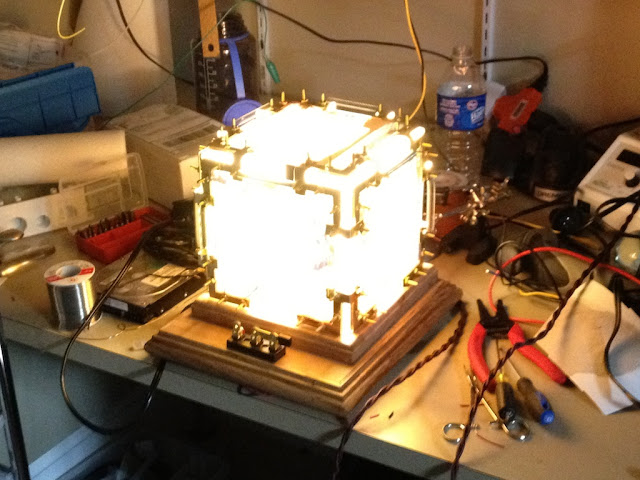 In the dark my camera made it look more like a steampunk nuclear reactor ;)
Posted by James Sentman at 7:21 AM