Our First Week with Makerbot 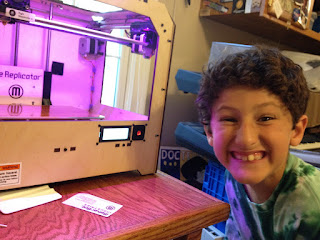 We’ve completed our first week with a Makerbot replicator in the house! It’s mostly been a big hit, the kids are designing their own models and we’re actually getting good prints of things. I have learned a bunch of stuff though that might be useful to know if you’re thinking of getting one of these things.

1) It doesn’t stink nearly as bad as I had feared. I was ready to have to build a hood and a fume extractor for the thing but while you can tell there is hot plastic in the room it’s temperature controlled enough that the plastics do not outgas or burn. The vapor pressure of the molten plastic at these temps is much higher than the air pressure, and the temp is well below where they start to decompose into nasty things so I dont think these require ventilation unless you’re doing something frightening like switching between ABS and polycarbonate and not properly clearing out the extruder first.

2) The MK8 extruder has what I think is a flaw. It will work great for a while and then eventually, and regularly it will just stop extruding. The shaft of the stepper motor that drives the feed wheel has a flat section along it that the setscrew in the feed wheel can be tightened against. The problem is the setscrew is so close to the body of the stepper motor that it does not actually engage this notch. The flat section of the axel doesn’t go close enough to the motor to catch it. So it’s just tightened against the round part of the shaft at the base. This works, but the thermal stresses of the wheel will eventually cause it to come loose and just spin. So you can either regularly take it apart and tighten the wheel (the design is excellent here, it’s very easy to get apart and service to this point) or you can use a dremel and a cutting wheel to extend the flat section of the shaft another mm which is all thats necessary. There are all kinds of problems with doing this potentially, so unless you’re comfortable with your demel you might not want to attempt it. I would also cover the body of the motor and especially the root of the shaft in blue tape to keep little metal bits from getting inside. Once you do this fix though your extruder will work perfectly.

3) you cannot completely level the build platform when it’s cool. Even the newly designed one will still move a bit when it’s hot leading to problems with printing. After running the platform leveling script you will have adjust it again when it’s hot. watch the first layer of one of the calibration prints print and adjust as it’s printing. This is potentially dangerous with your hands inside the thing and it will be hot, but it’s necessary to get good prints.

4) when your stepstruder is skipping DO NOT PUSH down on the filament! You will crash the heads into the platform and ruin one or both of your nozzles and score a line into the build surface. I am awaiting the MK8 .4mm nozzle to come back into stock so I can replace the left one which I ruined. If your plastic extrudes during the load process and looks app uneven or shoots to one side you’ve either got a clogged nozzle or you’ve fmirkled the end of it against the build platform. Be gentle with the end of these, they look like brass and can be easily messed up.

5) You can’t get large prints to stick to the platform. Everything pulls away for me, regardless of build platform temperature, raft, no raft or whatever. The way to solve this problem people have discovered is to pour some acetone into a jar and put in a bunch of your ABS scraps. Then when it has dissolved spread it with a qtip on the kapton tape of the build platform. This works wonders really, dont waste too much time thinking you dont need this before you try it, it makes everything work better to have the thing you’re printing properly stuck to the build platform. It doesn’t take much, just make the tape look all messy but not gloppy. 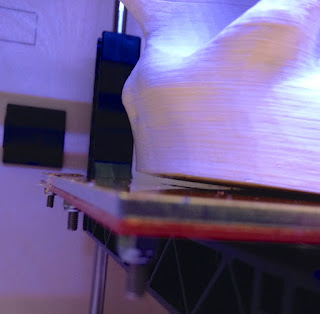 This is a huge print, and lifted a huge amount off the platform while printing. This can cause the model to just be off a bit which may not be a big deal depending on what you’re printing, or it may cause the print heads to bump into the model and knock it completely loose.


6) PLA is beautiful, you will want to print with this. Print test cubes with it and find the lowest temperature where it properly extrudes and print at that temp. You can change this temp in the gcode manually, there are instructions on the makerbot site for lowering this temp, it’s not hard. Each roll of PLA I’ve gotten (though I’ve purchased some from other sources like amazon and ebay) has a different ideal build temp. Otherwise it will sag, but if you get the temp right you’ll be able to print anything you can print in ABS with it perfectly. 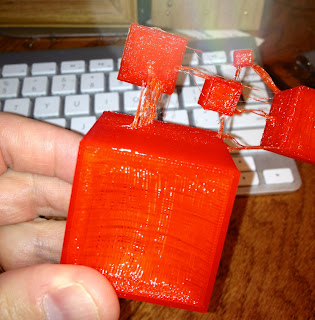 This red PLA printed at ABS temp you can see that it makes little bridges as it’s so liquid it keeps flowing it also sagged horribly over the top of the cube. Printed at 175 this PLA prints very good. 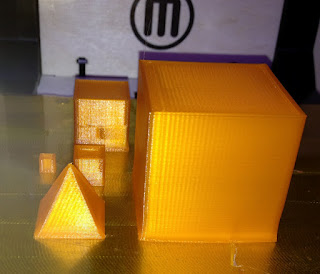 This orange PLA printed at 190 and it’s perfect, no bridging or extra flowing and it easily spanned the top of this empty box with no internal support without any noticeable sagging at all. This was before I discovered the secret of the ABS glue for the build platform though and had it heated up to 110C to make the cubes stick. You can see that this caused the bases to bulge out a little. With the plastic dissolved in acetone and placed on the platform you can use a much lower build platform temp and keep that from happening too.

7) make sure during the load process you get all the ABS out. Bits can come  out as you start your print, and if you’re printing at a lower temp than the ABS is fully liquid at (I’ve got a roll of red PLA that is mostly amorphous and not crystalin and it can be printed as low as 170 to get it to stop sagging, my makerbot rolls of pla print good at 180 and I’ve got a roll of orange that is so crystaline that it can print without sagging at 220 same as ABS, experiment) then the abs will clog the extruder. It may be necessary to start a calibration print at ABS temp to get all the ABS out before you can switch back and forth without difficulty.

9) keep an eye on your spools. The filament can get wrapped around the spindle and hang up, or it can even have been put onto the spool tangled in the first place. The roll of black my makerbot came was so helplessly tangled that i had to unroll half of it and roll it back up.

11) tinkercad to start with! If you’ve not done 3D design, or you want your kids to get started quickly use this. It’s not for complex things, but for starting out and doing some simple things this is absolutely fantastic. I’ve even used it for some duelstrusion builds.

12) Really this thing is awesome, and I’m starting to be able to design and print actual useful things that I bought it for (you know, other than just making sure the kids had a heads up into the new age of design for things, my children will be employable or self employable ;) 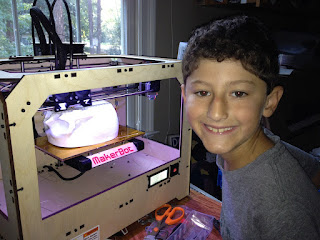 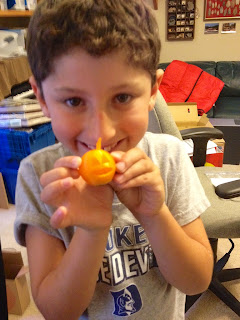 Ben designed that pumpkin ALMOST all by himself on the tinkercad site and he’s just 7.