I have too much stuff in my office. Or, perhaps my office is too small and serves too many functions. The solution to either seems to be better storage and drawers are just an excellent use of space. I built my large wrap around desk/table almost 10 years ago but it relies on shelves above it for storage and I was tired of boxes of unorganized stuff under it. It was time to build some drawers. Then there was the impending trip to Chicago for a week to pack up my father for a long distance move which provided the perfect excuse to ignore upcoming responsibilities and embark on a large wood working project.

I did look for pre-made or pre-fab solutions, but they were all either very expensive or very awful. The way the supports for my desk work means that the drawer either has to be shallow to avoid some middle supports or it has to be short to avoid the same. So my drawers would have to have a lower part that was deep and then an upper part to sit on top of that which was shallower to clear the supports. It would consist of 2 cases, a large one with 3' wide by 2' deep drawers that would come up to within 6" or so of the desk surface where it would have otherwise hit the middle supports under the desk. And then a smaller cabinet that is the same width, but only 14" deep to clear that same support.

Given the impending time crunch I originally started out thinking I would half-ass it quickly. This led me to build the cabinets from half in plywood, which was OK, but also led me to decide to skip any fancy jointery on the corners which I regretted later. Since the top of the cabinets will never be visible I opted for butt joints with the sides coming up flush to the top since they would be visible. The plywood edge of the sides would never be visible on the top or bottom so it wouldn't matter. Except that now after I made something nice I will always know it's there. 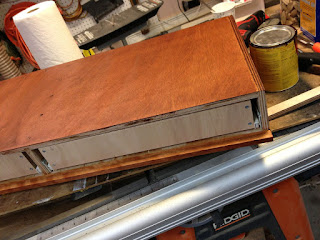 The smaller cabinet would have 2 smaller drawers. This is just sanded plywood after a coat of mahogany gel stain. I decided to do a fancy face for it with some Lyptus wood that I had bought a long time ago and have been just letting slowly warp in the garage. A little plaining brought it back to spec
for this. I was really surprised how beautiful the lyptus was with a coat of nothing more than linseed oil!

Something I forgot was that you can't build a drawer that is almost the same height as your case. You have to be able to tip the drawer in in order to get the wheels of the drawer slide in. So if you're using that type of drawer slide you need to make them short enough to get in. I fixed this in the larger case drawers by building shorter drawers but there are also more expensive drawer slides that dont require you to do this, but I was using what I already had. These drawers are now in permanently and cannot be removed... 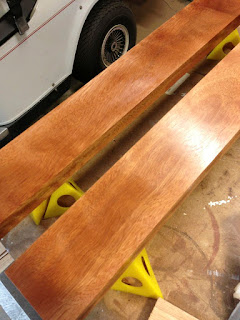 If I had known the Lyptus was that pretty I'd probably have used it for something before now ;) It matches the stained cabinet very well. The rest of the face frame was fairly straight forward and I attached it to the cabinet with biscuits. 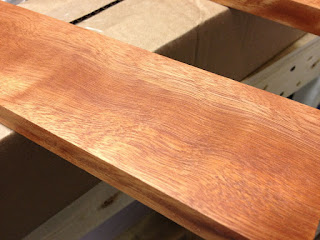 I pre-stained everything before putting it on since the cabinets were getting a totally different finish than the face frame. Lyptus is a hard wood, but works very nice. It sands up and finishes beautifully but the grain will raise like crazy if you get it wet. Since I had pre-finished it I just cleaned up any glue squeeze out with dry towels since I wasn't concerned about the glue keeping the oil from soaking in.

The larger cabinet was more work, but again I didn't do any fancy jointery on the corners. I did route some dados into the sides to hold supports between each drawer front and back which make it very steady and strong. Originally I had wanted to do a full piece in each spot, but that would have required a 3rd sheet of plywood and it would have weighed a ton. It's heavy enough the way it is so I just ran 4 inch strips front and back to attach the face frame to and for strength. 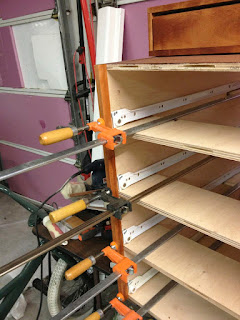 here's the left side of the face frame being clamped into position. The biscuits did a good job of keeping it from being pulled out of alignment but I probably still should have put every other clamp on the outside of the cabinet rather than all pulling from the same side. Though it worked fine the potential was there to glue it on crooked. You can see the biscuits for the horizontal pieces there already cut into the crossmembers. 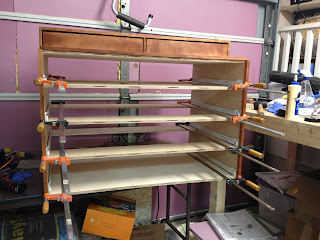 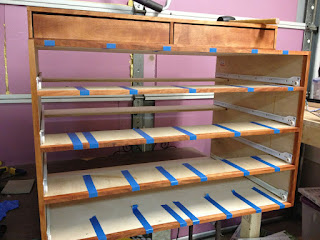 The horizontal ones I just clamped with blue painters tape and it worked very well.  I've already put the drawer fronts on the smaller cabinet here. I left a generous quarter inch difference in the left/right/top/bottom dimensions for those to make it easier to align. I probably could have done it with less of a gap if I had started out being more careful for the size of the cabinets. 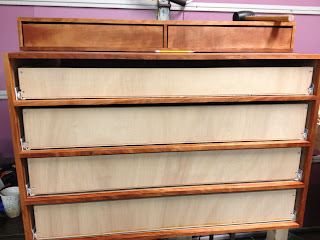 And mounted the drawers! Some adjustment and they all worked fine with enough clearance to get them in and out. Again half inch sanded plywood boxes with a quarter inch luan plywood bottom. Nothing fancy and no fancy jointery here either. I did screw the joints though and use an 1/8th roundover bit on the top of them all the way around. 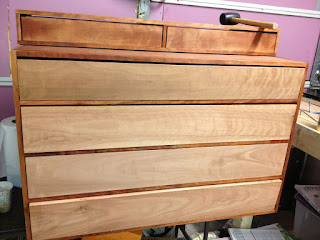 Here just test fitting the pieces for the drawer fronts to get the size exactly right before giving them a coat of linseed oil.  I almost wished it didn't need any hardware at all it's so pretty. Mounting the drawer faces I also didn't do anything fancy. I drilled holes into the front of the drawers that were much larger than the screw I would use to attach the drawer front. And then drilled a smaller hole into the same place on the back of the drawer front taking into account the extra 8th of an inch overhang on each side. A little thinking here and I got it almost exactly right. The larger hole in the drawer and a washer on the screw made adjusting them if not easy, at least possible. 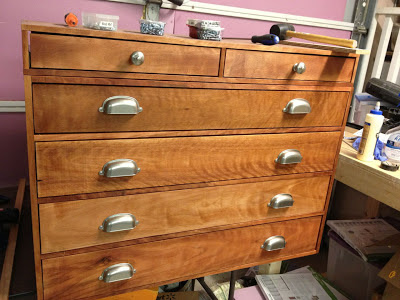 And then finally as finished. Haven't put the backs on in this picture yet, but I absolutely love how it turned out. A weeks projects working just a couple of hours a day and now I have it sitting next to me in the office making me happy and allowing me to have a little actual surface space to work on again! Every so often a woodworking project is necessary to keep the brain alive no matter how much other work is being expected of you ;)

If I ever make another one I would do a couple of things differently. Some rabbit joints on the cabinets would make it stronger and just make me happier. They wouldn't have added but an hour to the overall project time either. I somehow did the face frame different on the top small cabinet vs the bottom. On the top one I did the horizontal pieces coming all the way across and the bottom one it's the verticals that run straight through. They should both be done the same way. I really wanted to get every inch of space out of the thing so I designed it without any kind of foot or bottom. I should have given up 2" and put some feet on it just to raise the bottom drawer up out of the carpet. None of these things detracts from how happy I am with it but live and learn for the next project!

Posted by James Sentman at 8:11 AM