is it even possible to huff alcohol with dry ice? 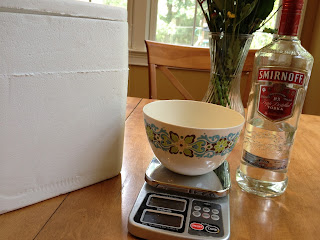 My kitchen sports an odd tableau today. Dry ice, bubbles, kitchen scales and vodka. I saw a fear and uncertainty and oh my god wont someone think of the children article today that claimed teenagers were getting dangerously drunk by inhaling alcohol vaporized by putting dry ice into a bottle and breathing the vapors. I was immediately skeptical that the alcohol would vaporize that way in any meaningful amount and since I had to go to the grocery store today anyway I decided to pick up some dry ice and sacrifice a few ounces of vodka to testing this.

I ran 2 tests with dry ice and one control bowl just to see if it vaporized just sitting in an open bowl at room temperature.

I weighed the bowls and added 2 oz of vodka and then a chunk of dry ice. In the first test I used tongs to move around the dry ice piece but when I realized I was removing drops of the sample each time I did this I stopped and only gently sloshed around the bowl in the second to keep the dry ice in contact with the vodka. I didn't agitate or move the control bowl at all between weighing it and weighing it again at the end of the experiment. 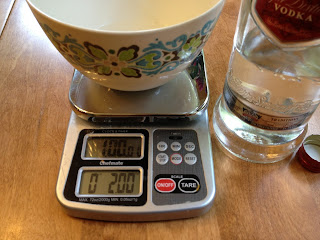 I recorded the weight of the empty bowl first as this kitchen scale wont stay on long enough to let the ice completely disappear and so the tear would get lost. This is me measuring in the 2oz of vodka. Then I added in a couple of small pieces of dry ice. 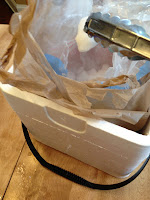 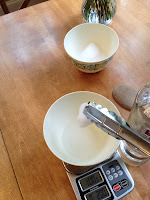 And I let them sit there and bubble. If you're going to get enough alcohol into you through any route even inhaling, then a significant physical amount of this liquid must get carried away along with the CO2. It's not homeopathic alcohol after all.

While I did not try to huff any of it during the experiment the fog did smell strongly of vodka and I thought for a while that perhaps that meant that a significant amount was being liberated! I was wrong.

While we waited my son and I performed all the other necessary experiments and delights that having extra dry ice around make possible. And I finally got that forming a bubble over the entire perimeter of a bowl to work making HUGE dry ice bubbles that pop in a cascade of fog that is just so much fun to watch over and over again :)

It took around 10 minutes for the dry ice to bubble away. Experiment 1, the one I messed with and lost a few drops, lost .05oz. Thats 5 hundredths of an ounce. (incidentally, also the smallest granularity of my scale, so it may have been slightly more or less) The 3 drops on the table under my tongs are more than enough to explain that. The second test lost nothing, it weighed exactly the same amount after the ice as it did before the ice. The control bowl lost .05oz as well, just sitting there at room temperature the alcohol was evaporating, but nobody got drunk off that. So it seems that putting the booze in wth the dry ice actually keeps it from evaporating, dropping the temperature so that the vapor pressure of alcohol didn't let hardly any at all escape into the air.

So I'm calling this one busted. There is no way that you can get drunk off inhaling the fog from a bottle of dry ice and booze. What you might get is hypoxic however, which could be very dangerous if you breathed only from the bottle for an extended period of time. But most of us have taken a few hits off helium balloons in our day and there is no oxygen in there either and as long as you kept it to 1 or 2 lungfulls you didn't pass out. Having been a teenager once myself I witnessed and even once in a great while took part in some things that would have qualified as sublimely stupid. Teenagers do this sort of thing. But huffing alcohol in this particular manner just can't do anything to you. There almost certainly are ways of actually vaporizing the alcohol though, if you wanted to heat it and bubble air through it, or do something really painful and stupid like put it into a cold mist humidifier you could probably make a cloud of it that had plenty of alcohol in it. But at least in that last example I challenge anyone to take a second breath after taking the first. You'd be choking and telling your stupid buddy that you were drunk enough and it was his turn and you'd also get it in your eyes. Ouch...

So tell your kids that if they see anybody doing this to leave the party, not because they are doing something really dangerous, but that they are too stupid to trust with other necessities of keeping themselves alive through the rest of the day.

Now.. if you'll excuse me I have 4oz of very well chilled vodka and a martini glass waiting for me to finish this entry.
Posted by James Sentman at 11:49 AM