The Makerbot is dead, long live the Makerbot! And a new Monoprice Select Plus 3D! 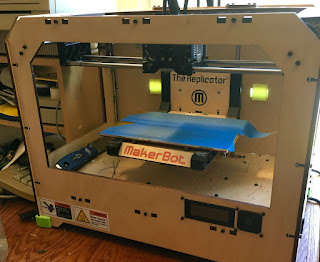 I actually use my 3D printer for printing small runs of plastic parts. They go with the Smart Meter Reader Kit and some others for kits that are not shipping yet as of this writing. They all connect to my day job which is XTension. Last week I needed to print another smart meter sensor mount for someone and found that my Makerbot was no longer recognized over USB even though it seemed to be working OK from the front panel. So the next thing I tried was to get it to print off it’s CF card and it wasn’t able to find anything on the car either even though it had just printed from that card a few months ago. Not having time to try to troubleshoot the boards myself right now I decided to upgrade to a new printer! Enter my new Monoprice Maker Select Plus 3D Printer! 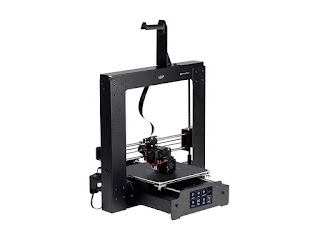 Costing less than a quarter of what the Replicator cost me several years ago and supposedly producing better prints. I’ve only had it for a few days now, but I’m generally hopeful that it will be a good printer and do what I need and for under $400 you can’t beat the price for anything with that build volume and a heated bed. Putting the hardware together was very simple but the software is a huge problem. As with most things in the inexpensive range of open source stuff it’s a nightmare to figure out how to use the thing. The documentation Monoprice is shipping with recommends Cura as the slicer and control app to use. Unfortunately their docs are enough versions behind the current Cura release that there is not a single window or screen in the app that looks like what they show. Every single option is in a different place and many of them no longer exist in the app at all. Trying to slice a model for it was very frustrating on that first day. It did print the test files that come on the CF card very nicely though, as good as my makerbot after lots of tweaking and fiddling with settings and several failed prints as part of the tweaking process. So I was still positive this was going to be a useful printer if I could just figure out the software.

There is an old version of Cura included on the CF card, but only for Windows. Why would they customize an old version of the app rather than supply the files so that you could more easily add the printer to the latest version? I have no idea. But it’s useless to me on this Mac and it’s becoming more and more useless to windows users as it gets older and older compared to the current release of Cura.

There are a lot of older web articles explaining how to extract the profile information from the models that came with on the card, but this is also no longer available in the newer versions of Cura. Finally the best resource I found talking about it is at 3dprinterwiki.info This is a fantastic site! The monoprice printer is a re-branded Wanhao duplicator I3 plus. On that site is a link to the slicing profile info that you need to know in order to make really nice prints on it. The same settings that were used in the demo files that ship with the printer that worked so well. The out of date instructions imply that you can somehow extract the profile info from the gcode files, but I could not find that feature anywhere in the current Cura versions so you’ll need the link from the wiki to get that setup.

Everything you need to know is on that site but you’ll do a lot of reading to get to it.

more info here too on the machine settings
http://www.makehaven.org/i/647

Additionally there is little point in trying to get Cura to print to the device via USB. It says it’s theoretically possible, but I was unsuccessful in making it notice the printer was connected even after a large amount of screwing around with different usb/serial drivers and settings in the Cura configuration files. I would stick to using the CF card and sneakernetting it to the printer. This also means that if you have a software crash or a power failure or just want to restart your computer or wander off with it you don’t have to leave it on the desk for however many hours the print is going to take.

The sticker on the heated bed in this printer works very well for PLA, but I’ve just received my first upgrade in the form of a glass plate and will be attaching that and resetting the Z Axiz sensor soon.
Posted by James Sentman at 8:05 AM