The various ways of making a web interface in XTension have suffered from a lack of an easy way to get an SSL/HTTPS connection going. The older interface using apache and X2Web could be encrypted by installing a certificate into Apache but that was "non-trivial" as they say in the business.

UPDATE: The new interface now has HTTPS and certificate generation built in! Setting up this software is no longer necessary for a secure connection to the XTension Web Interface, but it may still be useful for encrypting the connections to other services.

So in the meantime I have created a simple SSL passthrough server. It will allow a browser (or any SSL socket really) to connect to it, handle the decryption and forward the connection on to either apach on your local or other server, or to the new Web Remote. With the password set on the new web remote this should offer a good measure of security for your system.

To make this work you would run the program on the same server as XTension and set the port of the SSL Passthrough server to a high port. Say 8080. Then setup your NAT Router or airport to forward traffic to the SSL Passthrough servers port and NOT the native port that your web server or web remote session is running on. The passthrough server will forward the hits on to the unencrypted server on your local machine or across your local network and sniffing your password on an unencrypted wifi or other network will be as difficult as any other HTTPS encrypted connection.

The server can be used with any web server or remote product that you're using on the local network.

The first thing you must do is to create your own ssl certificate. You can do this with the built in tools on MacOS. Follow the first 4 steps on this web page. Once you have the resultant files you need to use any text editor to past 2 of them together for the sslpass program to use. First open the "server.key" file. it should begin with a line like: "-----BEGIN RSA PRIVATE KEY-----" then open the "server.crt" file which should being like: " -----BEGIN CERTIFICATE-----" cut and past both blocks of data one after another (a couple of lines of clear space between them in the text file is fine) into a new file. Save that file into the same folder as the sslpass program and call it "certificate.txt"

the folder with the application and the certificate should look like this: 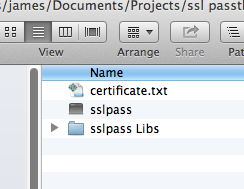 the program is a command line application that you pass the parameters to from the command line. A typical setting might be something like:

that would be the simplest setting, it will listen on port 8080 for HTTPS connections and forward them to the localhost on port 80. The last 2 parms are the default. If you are using this with X2Web then thats really all that is necessary. If you wish to forward it to a different port say for a WebRemote install you would do something like:

assuming that your web remote instance was running on port 10023 on the localhost. You can run as many instances of this passthrough server as you wish for encrypting multiple web servers on multiple ports. Or even pass through to unencrypted sources on entirely different machines by adding the optional -remoteaddress 192.168.x.x parameter.

if you wish these passthroughs to be started automatically you can include them in a terminal file and make them part of your startup items. Paste the command line as you would type it into another text file and save it with a file extension of ".command" so it might be something like "startsslforweb.command" when double clicked that will run it as if you had typed it into the command line and you can add those to the startup items in the user control panel for launching upon startup.

Remember though that you can't set it to listen on a port less than 1024 without some dangerous permissions magic. Dont do it.

The program requires an Intel Mac, and it should run as far back as OSX 10.5 though I have not tested that. The program is freeware for owners of XTension, please consider purchasing a license for one of the XTension add on programs that I sell like the web remote or XTdb.

PS: this program uses only the open SSL libraries as available all over the world and used in every web browser currently shipping in every country. If there are other import restrictions to your country from mine please do not download this program.