(In the time honored tradition of repeating history I am manually moving old blog posts that I still deem of any worth from my old server to blogger. This entry was originally written on October 11th, 2008) 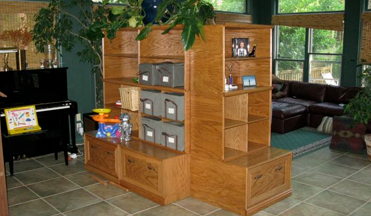 The family room here was getting a little overrun and there just wasn’t any good place to store anything. I quickly learned that a set of these shelving units in any quality material would set us back more than a grand! So I decided that I needed more projects and set about to build some.


There are 3 units, above arranged in an L shape dividing the room into the TV room behind them and the playroom on the other side. I had done an almost identical, but white painted, set of these 2 years ago for my nephew so I already had a bit of a head start on the layout but I decided to add in some improvements. The base cabinets here would be large drawers and I wanted to make the entire thing out of actual wood (or at least plywood with a good veneer for finishing) which would complicate the joinery a lot. I couldn’t use the same rabbit joints that I had on the previous one as the ply wood edges would show. Luckily since the last box making project I had invested in a few new power tools that would make it possible, a new table saw that was actually capable of cutting a straight line and a 45 degree bevel as well as my new pride and joy of the shop a Festool Domino joiner. Which was a ludicrously expensive loose mortise and tenon joiner but worth every penny as I don’t think I could have finished this project without it.


I dont have any good drawings or plans, the design was basically copied from a catalog that my wife liked. I adjusted the size slightly to reduce waste in cutting from 4x8 sheets of oak plywood, but didn’t make any other major changes for the size anyway. I built the bottom cabinets first as they were the most complicated with the drawers. I had never tried to install drawer slides in anything before and I was a little nervous about it all coming out square enough to make them work. Here again the domino jointer came in terribly handy as it’s alignment was so close to perfect as to not matter.

Assembling the drawers was actually really easy. A dado to hold the bottom and 4 tenons in each side. Since the drawers were entirely internal I didn’t worry about fancy joinery here just a tenon supported butt joint. I did keep forgetting to adjust the depth of cut on the domino though. The tenons are longer than the depth of the plywood so I had to cut deeper into the side of the back piece than the face of the sides. And when you forget to adjust that you plow through the front... Luckily these ended up being either on the back of the drawer which nobody else will ever see or on the front and hidden behind the drawer front so no harm done. Better to get the hang of it here than on the main case pieces.


I can’t over state just how cool these joints are. The stuff just glues up beautifully and pulls all together perfectly. Here’s a shot of the inside after it’s all glued up and the clamps removed. 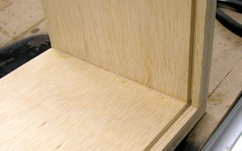 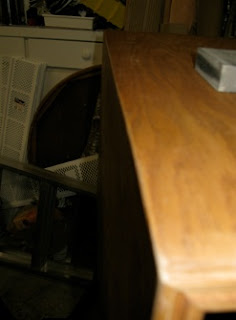 The challenge with the outside case was the edges. I didn’t want to do a lot of fancy edge work and I didn’t want the plywood edges to show and it all needed to look clean since it was going to end up in the middle of the room instead of against the wall. The pretty much limited me to doing a 45 degree angle and bring the edges together. The domino joiner came to the rescue here also. The fence has a setting exactly for this. All along the inside of this joint are tenons at an angle to mate the 2 together, and again it performed wonderfully. Holding the fence on the 45 degree cut was a little tricky and I blew a couple of them getting the hang of it, but it was easy to just add more. Then some glue and pound it all together and the tenons pull them together wonderfully. Still required a huge number of clamps, but the edges look really nice. The new table saw I added to the shop (garage...) for this helped too, the old contractor saw I had couldn’t cut a straight line without kickback much less a precise angle, but the new one was able to cut the angles and do it without too much tear out or anything. I was quite happy with it. 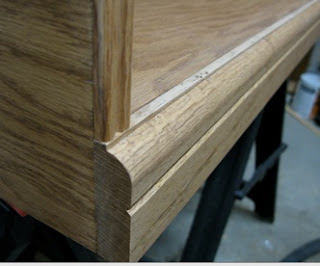 The kick plate I did with just 2 or 3 passes through the router and flat on the sides so that it would mate up with the ones on either side. The bottom of the case is also held in with dominos and is really strong without my having to mess with dados of the proper size to hold the plywood. It would have made the joint edge look better if it had been recessed into the sides, but I dont actually own a dado yet that can do this, so I compromised. The side moldings were also custom made on the router and are tacked on with my other favorite tool the air brad nailer. There are dominos along the front of the bottom into the kick plate as well to keep it from coming unglued if someone should step in the middle on it someday or something. Probably not necessary as the drawer will be on top of it. 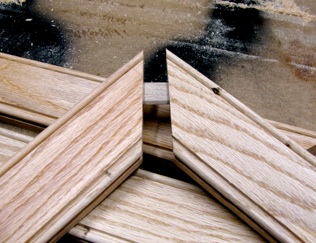 The drawer fronts are a traditional framed panel. The edges I put a bead on with the router. I was forced to invest in a new powered miter box to accurately cut the 45 degree edges here, but when setup properly it did a really nice job, and again you see a domino tenon in there. A little glue and a few clamps brought the thing together beautifully! 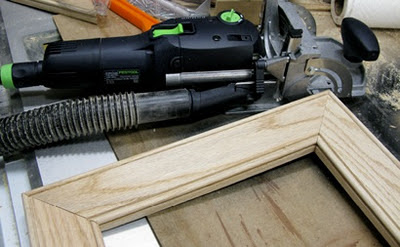 There pictured with the domino jointer is the frame! After a lot of finishing and assembly I actually got around to mounting the drawers and giving them a test. 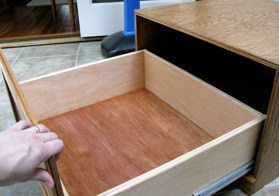 Full extension slides and I even measured close enough that they didn’t bind or leave excessive gaps! These drawers are big enough that you could curl up in one if you really wanted to. I couldn’t be happier with the way they turned out. 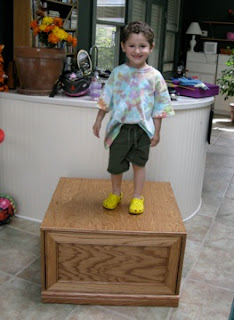 Here’s Ben testing out the structural capacity of the first one to be carried in finished by jumping up and down on it. He tucked in his own shirt for this picture too :)

The top pieces were easier in that they were smaller and I had already done quite a bit of the 45 degree joinery with the domino now, but were more complicated in that they had 45 degree joints on every face but the front. No bottom to leave flat and make things easier. I also discovered that it is not possible to assemble a 45 degree angle joint around an entire box like this by yourself with the tenons in. The top joint in them had to be left to be simply glued, but I dont think that will make them any less strong.

The inner divders and shelves were again butt jointed with the dominos providing the strength. If I were to do it over again i would invest in the dado blade to cut grooves for them, or perhaps a router bit of the correct size to cut the dados as you can tell they are butt joints if you look too close. No matter how careful I was with cutting the plywood that edge will never be perfect and even though most folks dont notice that, I know that it’s there.

Finished product though turned out terrific. Makes the room in there and makes me very happy. Even with purchasing that ludicrously expensive joinery tool though the entire project only cost a little more than purchasing something made out of particle board would have cost. And now I have the tools and the skills to move on to the next project. 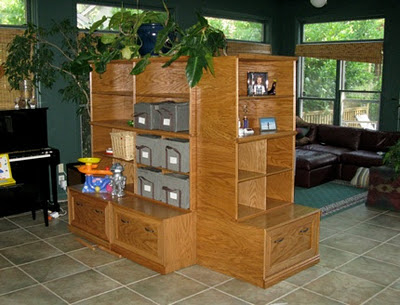 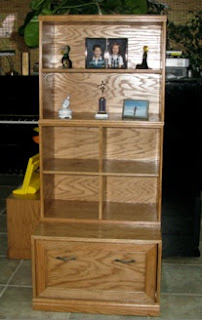 (notes from the future: we’ve moved since these picts were taken. In the slightly smaller new house they are no longer together as a unit. 2 of them are in the kids workroom and the third in Ben’s room as his bookshelves. They still look terrific and the only things I’d have done differently would have been not to buy the plywood from Home Depot as it turned out to have many voids in the inner laminations that caused some cracking in the outer veneer, home depot carry lousy quality plywood?! Thats unbelievable! and I’d have been more careful watering those plants we put on top of them as water did run between the 2 in the middle messing up that finish. I couldn’t see it the way they were in the old house and wasn’t aware of it, but in the new positions I see it all the time and am eventually going to get around to sanding it a bit and applying from fresh finish.)
Posted by James Sentman at 12:03 PM