It has become necessary to begin a small woodworking project for the preservation of sanity. The kitchen needs a skinny, open frame book shelf for cook books and such to get them off the counter. I have quite a bit of lumber that needs to be used up for projects so a little complexity is added by having to make use of whats already taking up space in the garage. Some good pine 6 inches and some more that is 3 inches which I'll joint together for a 9 inch shelf which is wide enough for most of the cook books. It's a little skinny for stability but I can screw it to the back of a cabinet to make sure nobody pulls it over on themselves. 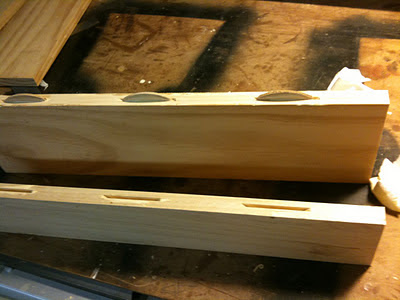 Used biscuit joints to join those 2 pieces together for the full width of the shelf. If I was buying lumber of the proper width this step wouldn't be necessary. 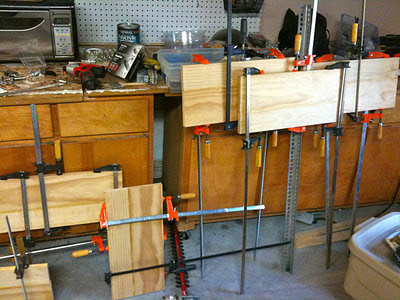 clamps are a bit big for these little shelves but I have enough of the bigger ones to do all 6 shelves at once. After they are clamped I ran them through the thickness planer to eliminate any differences between the 2 pieces and they feel much more like a single piece of wood except for the changes of grain. But those will be less obvious after finishing. My planer is a cheap one and it leaves a bit of a dwell as it goes in and comes out of the blades, if I had remembered this I would have made each shelf an extra 4" longer so that I could trim off the section that got that flaw, but it isn't too bad really, makes it look a bit more like recycled lumber and have some extra character. 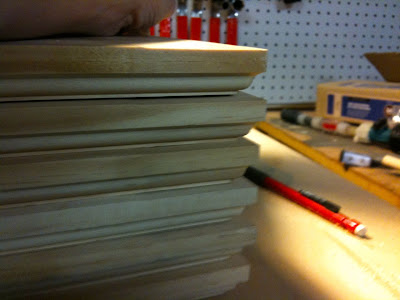 After trimming the edges so they are the same finished size I ran them through the router table for a nice ogee edge. If I had planned ahead I might have added edge bocks to the outfeed side to avoid the little bit of tear out on that side, but only 1 actually looked bad enough to notice and I sanded them out fairly good. 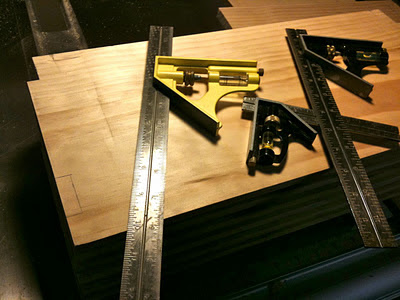 The uprights are 4 1x2 hardwood pieces. Not just putting them on the 4 corners but adding a bit of character. The back ones are flush with the back, but stand proud of the edge far enough to clear the beading I'm going to route down each edge of the uprights. The front ones I started an inch back but the same amount proud as the rear ones. Since we loose an inch front to back the stability of the thing is further reduced, and it's going to be tall about 14" between each shelf as I want the top shelf to be high but it's going to be screwed to the cabinet anyway. 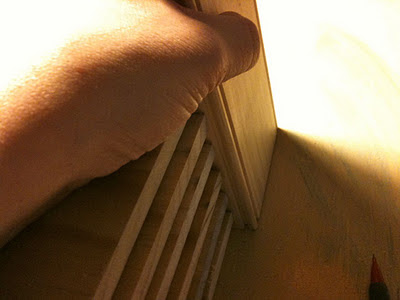 just checking the back cutouts. That upright isn't the final one, it's actually 3" wide instead of 2 and just a short scrap piece that I used to setup the beading bit in the router table. They look pretty good I thought. 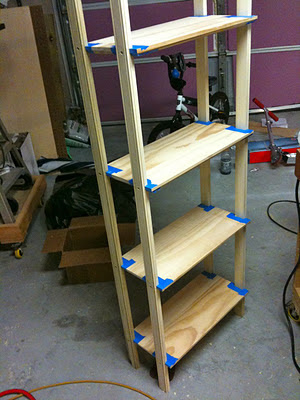 Rough assembly. I thought about doing some fancy tenon joinery inside the cutouts, but that would have been difficult and this was a quick weekend sanity project. So after lining up just placed an inset screw through to hold the shelf. After this was dry I plugged the screw holes and sanded them flush. Almost invisible and yet still very strong. 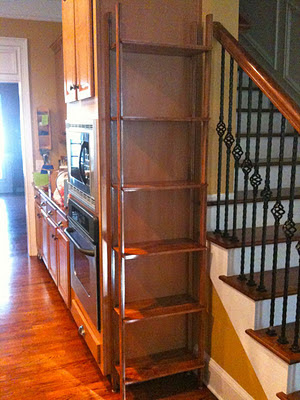 The finish is a mahogany gel stain and spar urethane varnish. I dont normally like gel stains but this gave the pine a really nice dark and even finish that would not have been possible with a regular stain. Also I left some extra stain in the beading for further antiquing. It looks really nice and is only a little darker than the stain of the cabinets it's attached to. 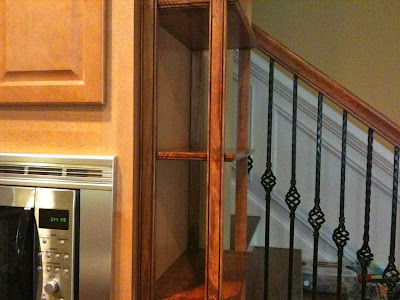 The natural uneven take up of even the gel stain made the wood look much more interesting, I like the effect on the uprights very much. I could have reduced this with a pre-coat of a 3 pound cut shellac prior to staining, this is a great technique for any non-hardwood you're finishing with any stain but it would have added an extra day to the project, and it really does look good the way it came out. 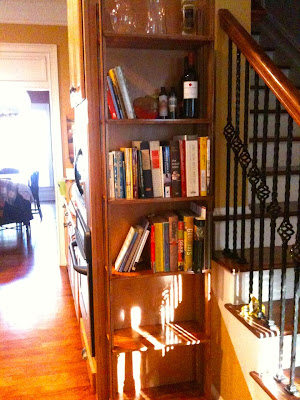 screwing it to the side of that cabinet makes it rock solid. Another detail was a little 1 inch cutout at the bottom of the back upright. This lets it sit flush instead of against the quarter round molding that runs along the bottom of the cabinets. All in all I'm very happy with it, the spousal approval level is high for a short duration very inexpensive project and it looks great.

(notes from the future: I love these shelves.)

Posted by James Sentman at 7:23 AM