(following in the proud tradition of repeating history I am manually moving my old blog posts from my server to blogger. This post was originally written on October 3rd 2007) 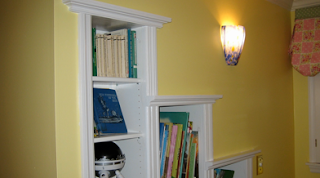 Turning some wasted space into a little library nook for my daughter. 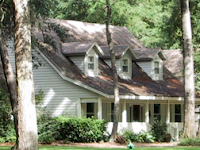 The front of our house has 3 little gable window bits jutting out from the roof. They look nice and pretty from the outside, but they are so skinny that they don’t provide much usable space on the inside. One of them opens into my daughters room and gives her a second window out the front, but it’s down this short skinny useless hallway like feature. It was dark (even with the window) and really too skinny to put any furniture in or to use for anything.

My first thought was to pull out the knee wall entirely, or at least push it back a few feet under the roof to increase the size of the room a bit. After careful consideration though I recalled my last few experiences trying to do drywall work. The framing is no big deal, these are not weight bearing walls, but the thought of purchasing some drywall and installing it and doing a good enough job taping and mudding it so that I wouldn’t be looking at it and cringing every time I walked into her room talked me out of that. So instead I decided on some built in bookshelves along the side wall instead.

I made a couple of experimental cuts into the wall to locate the roof angle. Each of the 3 shelves would go into a joist space up to the roof without messing with the studs at all. The height you see in the shelves was dictated by the roof angle. Each one ended up being 13 inches shorter than the previous one. So after measuring the height from the top of the floor molding to where it would hit roof and subtracting a quarter inch for my own inaccuracy, then doing the same for the width of the 3 joist spaces I set about building 3 plywood boxes. 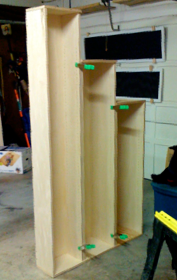 The first joist space was a little skinnier than the other 2 which were standard 16” on center studs. I measured and then subtracted a quarter inch to give me some wiggle room, both for my own imperfect skills as well as the fact that they joists probably weren’t exactly straight all the way down either. An 8th on each side can be easily shimmed and then covered by molding.

The only other complicated part of the boxes was the depth. I made the sides where it was going to be flush with the wall 3/4” longer so that they would come up and meet the drywall. The edges that were going to meet the studs and be covered with internal moldings I made 3/4 short so that they would not stick up past that. You can almost see it in that picture where the tops are a little longer than the sides in the middle one, and longer than just the outside sides on the others.

The holes to hold the shelf support things were fairly easy. I purchased a piece of pegboard and just clamped it inside the case and drilled through each hole down a row. This made sure they were straight and even. As long as you clamp it down the same amount on each side they will line up for level shelves. I didn’t have to make any special preparations to install them. I just cut the appropriate size holes in each joist space, removing the drywall bits still clinging to the joists in the middle and screwed them to the joists. 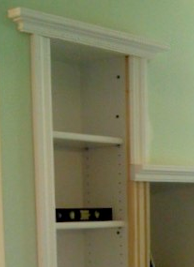 I’m actually pretty proud of the molding. I’ve never really gotten my miter box to cough up decent 45 degree angles, but I’m getting the hang of it. I had to build out the crown molding and add those side pieces to it so that the side molding pieces would be even with the bottom of it instead of proud of it if I hadn’t done that, so there was some extra work there.

The side moldings are just regular, pre primed stuff from the hardware store. The moldings down the middle between the boxes are custom made and run through the router to round the edges and put those coves down them. They had to be custom since they needed to be the correct width to cover the stud which still runs between the shelves and cover the plywood up to flush with the inside of the box.

One tool that I will never again be without when doing molding is my nail gun! My mom sometimes buys me tools for my birthday ;) And last year I got a little compressor and nail gun kit with her help. In learning to use it I learned that the longer nails really dont like to go where you want them to, they can bend along the grain and pop out on the totally wrong side of the piece rather than go straight. You really do have to pay attention to the grain and adjust the angle you’re shooting at. But for shorter brads to hold on a molding while the glue sets they are the ideal tool.

Here’s the final product after repainting the room from the nasty light green to a nice bright yellow as well. I added that light sconce as well. When the wall was open it was easy to get power from the outlet on the other wall inside the attic space and route some new romex to that switch and then up to the light. That lamp is above the roofline, so I had to use an old work box and push the romex up behind the insulation, but it wasn’t very difficult. The dangers of doing your own electrical work, as well as when using the aforementioned nail gun are beyond the scope of this little article... 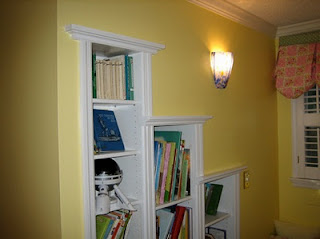 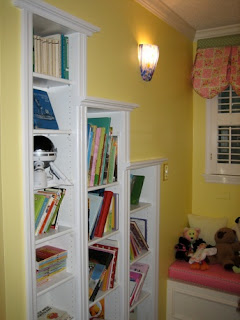 Posted by James Sentman at 4:09 PM