(having just witnessed the state of the union address I can post this historical article with the greatest pride in the congressional tradition of repeating past mistakes and ignoring the similar results... The difference being that at the end I’ll tell you what has changed and give necessary updates. This post originally appeared on my server on August 26th, 2010 and is being moved manually to this new blogger account as I deem it of some value.)


When I learned that there were multimeters out there that had documented serial protocols I added that to my todo list for XTension support. I bought this one from radio shack more than a year ago and never got around to looking at it in any detail. Now with the kids just starting back at school and having just unearthed the protocol docs it was time to do something about it while I refreshed my memory on the code I haven't touched in months while I played with the kids over the summer. This is just first light, it's not quite beta ready yet but it's talking to XTension and updating a unit value in the database for the displayed value. Here is my Radio Shack model 22-812 multimeter with an FTDI usb/serial adaptor sticking out of the top and a View in XTension showing the value. 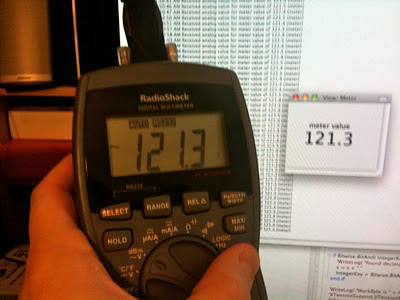 (wisdom from the future: Since this beta I have revisited the code several times. It now has a significant change setting that you can setup in the interface settings as well as following automatically the type of thing being measured so that it displays, ACV or DCV etc. A problem remains in re-syncing after a restart if the device was sending data throughout the downtime, there may be garbage in the buffer that confuses it. If this happens just turn off the serial output from the device, restart the interface in XTension and restart the serial stream. I use this to measure line voltage fluctuations here and graph them opposite my amperage usage as measured in my main panel. It’s interesting to watch the electric company kick in and drop out auxiliary generating capacity at times of high load.

The plugin for this remains as part of the standard XTension distribution as I don’t consider it out of beta as only about 2 people are using it besides myself... Once I fix the resync issue it will probably become part of a commercial data acquisition plugin for XTension. For the moment though you can experiment with it for free.  1/25/12)

Posted by James Sentman at 6:58 AM