(repeating the past... I am moving this post manually from my old server to blogger. This was originally posted on August 11th, 2010)

Really nice new house, but the lights under the cabinets are so ancient that the tubes actually have a starter and click click light BZzzzzzz. Totally unacceptable! Good under cabinet fixtures, even of the regular florescent type (and I have no interest in the halogen type, too hot and wasteful not to mention continual bulb changes) are very expensive, upwards of $50 a light and more for the wider ones. Little LED ones are available but they are even more expensive but not nearly as bright. Current limited power supplies for LED's are available now directly from china at pretty decent prices and one watt warm white LED's are not that expensive anymore either so I tried to roll my own to replace the lights here.

The power supply is a 7 to 12 LED driver from dealextreme.com and the LED's are from them too. All you have to do is solder them in series and glue them to a heat sink. But that is not as easy as it sounds...

I decided to reuse the fixture cases already wired in under my sink, the power supply is small and will easily fit in them. I used a piece of u-channel aluminum an inch or so shorter than the length of the bulb that used to be in the fixture and arranged the LED's upon it.

First lesson learned: The wire I used was too thick. It's just a watt of power so thinner wire would have been fine and would have made it much easier to manage during the glue up portion.

Here's the channel with the led's being held down while the epoxy cures with blue tape. 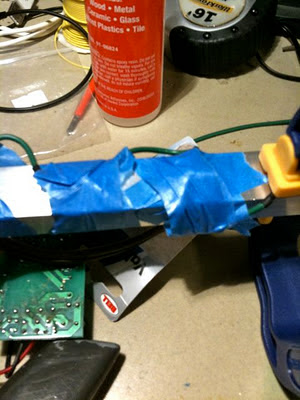 as it turns out, blue tape could not hold them in place with the resistance from the overly heavy wire I used and none of the glued flat. Heat kills LED’s they must have good attachments to the bar or they will dim early. So I pried them all off and began again, this time using one of these blue clamps which have cutouts in the face just about the right size to cradle the lens on the LED without breaking it. So now they are all glued on right and they are really quite impressively bright even without any lenses. 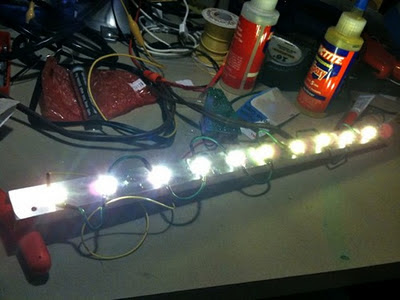 I just screwed them into the same case as the old lamp, replacing the ballast with the new power supply. They are quite a bit brighter than the old lamps and are a superior color temperature the heat sink gets warm to the touch but never so hot that you couldn't hold it which means that either I"m not making good thermal contact with the LED's and they will shortly self destruct, or that it's working great and well within thermal limits for long life.

Putting the diffusor back over them though reduces the output considerably, so for now I've left it off. You can't see them under the cabinet anyway, but I need to figure out some better ways to make it pretty before I replace the rest of them.

(letters from the future: I ended up building 4 of these for under the 2 countertop areas they are terrific. The light maintenance hasn’t been 100%, probably down to 80% and then stopped degrading in any way I could notice in the last year. One LED burned out for some unknown reason in the middle of one array, I replaced it and it came back to life. One power supply stopped working and was replaced with a newer version from DealExtreme with similar specs. I am very happy with them still!)
Posted by James Sentman at 10:43 AM